In the wake of World War II extraordinary works of art were created from metal and scrap detritus that carry with them both meaning and memory. The Things They Carried: World War II Trench Art is an exhibition that offers something tangible to the investigation of the human spirit during times of war. Expended artillery shell casing, bullets, shrapnel, ship, tank and aircraft parts are transformed into emotionally charged souvenirs. Objects such as delicately engraved artillery-shell casings; ashtrays, jewelry, sugar scoops, model planes and personalized cigarette cases and lighters tell of life and death experiences with tactile immediacy. For many serving on the war front, objects were created during stays in the hospital, prisoner camps, or in the trenches, recording their experiences with artful craftsmanship.

A bullet or bomb carries no such other meaning than hurt, death and total destruction. Yet, patiently tooled, crafted, carefully engraved and thoughtfully expressed Trench Art reveals the personal and historical experiences of WWII with the things they carried. The term "Trench Art" originated in France during the early years of World War I when soldiers in the trenches began transforming weapons of destruction into healing forms of art. The term has since been expanded to include objects collected from the battlefield by troops or non-combatants, handcrafted pieces created by troops or civilians from battlefield detritus, handcrafted pieces made by prisoners of war, handcrafts made by wounded troops, post-war souvenirs made by ex-troops and civilians, and “trench art style” manufactures war souvenirs. Like most folk art, trench art is largely anonymous; artists may not have considered their work important enough to sign. Most World War II trench art comes from North Africa, East Asia, Europe and Hawaii.

This exhibition is sponsored by the Oceanside Public Library and the National Endowment for the Arts. 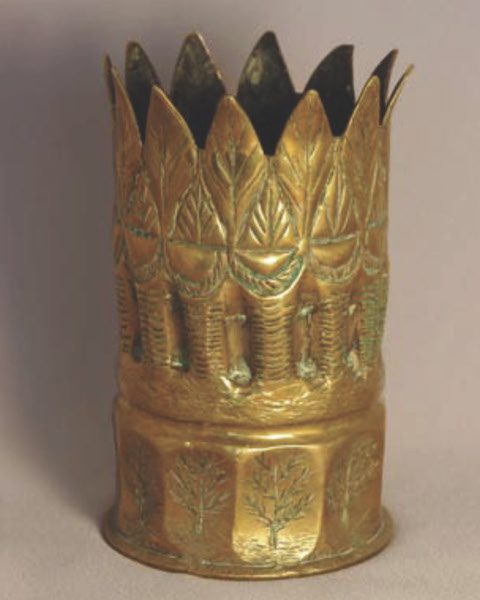