As soon as visitors step inside the Oceanside Museum of Art they are greeted by dozens of 5-inch-by-8-inch prayer flags that hang above the lobby entrance and stretch to the north, south, east and west.

Like traditional Tibetan prayer flags, which are usually hung outdoors, the flags carry the wishes of the artists who made them. Flags on display were made specifically for the exhibit.

A worldwide call for entries went out via the The Prayer Flag Project website and 145 flags were sent in. The website, run by artists Vivika Hansen DeNegre and Jane LaFazio, encourages individuals and groups to make prayer flags and blog about their experiences. “It’s art that can be made quickly and meaningfully,” LaFazio said. “A thought strikes me during the day, I’ll decide what it is and put it out there. There’s beauty and joy in making the flags.” LaFazio said the flags create a sense of hopefulness in those who make them and view them.

Flags on display were sent in from Italy, Australia, the Netherlands and the U.S. About half of the flags were made locally. “I know people will be drawn to come up close to them,” LaFazio said. “Art is very healing.” The flags carry prayers for peace, love and good health. “Peace, happiness and joy are common prayers,” LaFazio said. “Those that are specific are always very touching. They all are heartfelt.” “They have a spiritual kind of feeling,” Danielle Susalla Deery, museum director of exhibits and communications, said.

In Tibet it is believed that the wind carries the hope of the prayer and when a flag becomes tattered and faded by the outdoor elements the prayer is answered. As part of the exhibit a documentary short on Tibetan prayer flags by father and son filmmakers Ron Ranson and Tim Ranson, of Leucadia, plays on a continuous loop in the corner of the lobby exhibit space. Ron Ranson has been to Nepal six times. On his last trip in 2011 he and his son filmed the annual tradition of the changing the prayer flags. Ron Ranson said it took a 36-hour flight and a 10-day walk to get to the remote site in the Himalaya Mountains to film the event. 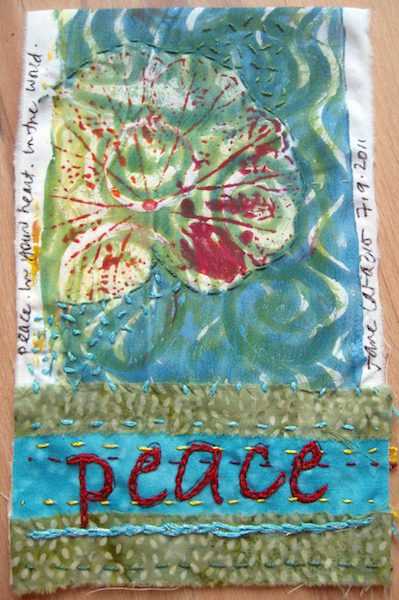