Covering thirty years of work, the show gathered examples of woven and wrapped objects in synthetic materials and colors. Aluminum can strips, miniature plastic dolls and brightly colored plastic washing lines are Garrett’s materials of choice. In his own words, Garrett explains the frenzied surfaces of his work as an interest in “the boundary between abundance and excess.”

While attending graduate school at UCLA and later as a teacher there, Garrett salvaged scrap materials from the urban Los Angeles landscape. The urge to reclaim and recycle has become a signature theme for his work. “Hollywood Nights” echoes the neon shop signs and car lights of Los Angeles through painted vinyl and plastic interlaced and lashed to a wire grid. “Pop Pod” reassembles the soda can into a vessel of another kind. In each case the surface creates such energy that it is difficult to discern the rudiments of the structure beneath.

Larger-scale pieces have been designed in a manner that allows museum staff to assemble the works themselves. Garrett’s “Trash Basket”, reminiscent in ideology of installations by the late Cuban artist Felix Gonzalez-Torres, reincarnates itself with each exhibition. Weft materials are left to individuals at each new venue to interlace, resulting in an ever shifting pattern for the over-sized vessel. Each of John Garrett’s investigations belies any sense of familiarity evoked by the recycling. Instead, the results produce objects of disarming complexity and vitality. 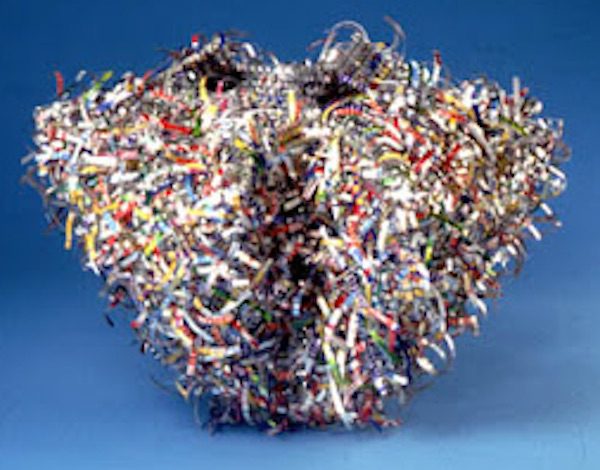