Charles Arnoldi, one of the most significant contemporary abstract painters, sculptors and printmakers of our generation is internationally recognized as an accomplished colorist, who came out of the booming 1970s Los Angeles art scene. Intersections will present a sampling of Arnoldi’s seminal early tree twig and acrylic paint constructions and chainsaw wood relief sculptures that brought him immediate acclaim in the early 1970s. Paired with selections from his his recent Grids, Windows, Chainsaw, Arcs, and Case Study series this exhibition will trace the evolution of Arnoldi’s artistic career over the last 50 years.

Arnoldi’s early artistic experiments of the 1960s and 70s are defined by his layered three-dimensional constructions of tree twigs and acrylic paint. These works, placed flat against a canvas or standing alone as sculptural objects, appear at times complex and chaotic, at other moments simple and delicate, reflecting an expressive approach to the concurrent stream of Minimalism. His naturalistic medium of twigs and wood carried into his work in the 1980s, where cross-hatched patterns of painted groupings of twigs created their own internal structures upon a seemingly two-dimensional canvas. As the 1980s turned into the 90s, and further into the 2000s, Arnoldi’s three-dimensional sculptures evolved into the two-dimensional plane of organic abstract painting. From the 2000s on, Arnoldi focused his artistic expressions on painted grids made with asymmetrical abstract patterns and bright colors, with Grids (2006-2010) and Windows (2007-2010) directly referencing the “digital” grid-style works of Ellsworth Kelly, while Medals (2005-2010) and Arcs (2007-2010) displayed Frank Stella’s 1960s wall-sculpture-style painting with a gritty, unpolished asymmetry. Arnoldi’s most recent works of the past few years have incorporated both his “stick” and grid-based periods into a monochrome series featuring or simulating the way wood behaved in his earlier works.

Born in Dayton, Ohio in 1946, Arnoldi left the Midwest shortly after high school and headed to California where he attended three art schools, including Art Center and the famous Chouinard, before leaving formal education altogether in 1968. He currently lives in Malibu, CA.

The Los Angeles County Museum of Art (LACMA), the Metropolitan and the Smithsonian are among the many institutions holding Arnoldi’s work in their collections. Arnoldi has been exhibited at numerous museums and galleries including The Frederick R. Weisman Museum of Art and the San Francisco Museum of Modern Art, among others. 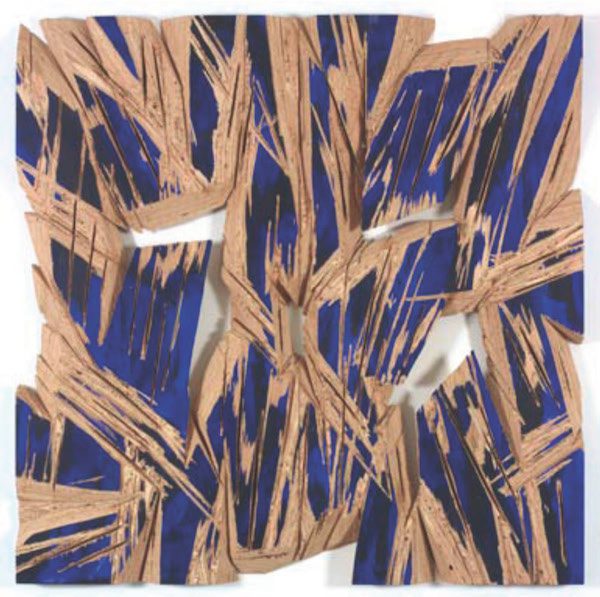 Support our Year-End Annual Fund. Your donation today will go twice as far with a matched donation of up to $50,000.