Oceanside Museum of Art is embarking on a series of special programs inspired by the art in the coming exhibition, Esther Nisenthal Krinitz: Fabric of Survival that celebrate Jewish culture and honor Holocaust memories. Esther Nisenthal Krinitz was a teenager in rural Poland when the Nazis invaded her quiet village changing her life forever. Separated from their family, young Esther and her sister survived the Holocaust pretending to be Polish Catholics, eventually coming to America after the war. In New York, Esther began her life as Mrs. Max Krinitz, and continued the sewing and embroidery she learned as a child. She was an avid storyteller and throughout their lives, shared with her daughters the story of her harrowing days as a youth in Nazi occupied Poland. A gifted seamstress, Esther decided at age 50, to tell her story in cloth, stitching thirty-six beautiful and poignant applique and embroidered panels which comprise the exhibition, Esther Nisenthal Krinitz: Fabric of Survival. The exhibition will open on Sunday, June 14th with a Holocaust Memorial Service from 2:00 to 4:00 p.m. conducted by Rabbi Dorit Edut.

Bernice Steinhardt and Helene Mcquade, the daughters of Mrs. Krinitz, will share their own memories and observations about their mother's work at a lecture and book signing on Thursday, June 28th. Bernice and Helene will display a number of images in the exhibition and they will also talk about their nonprofit educational organization Art and Remembrance that is dedicated to using the power of storytelling and art to illuminate the effects of war, intolerance, and social injustice. See and hear Esther tell her story in a short film interview with acclaimed film director, Lawrence Kasdan.

The exhibition and associated programs have been made possible by grants from Robert and Allison Price, the Leichtag Family Foundation and the Oceanside Arts Commission. 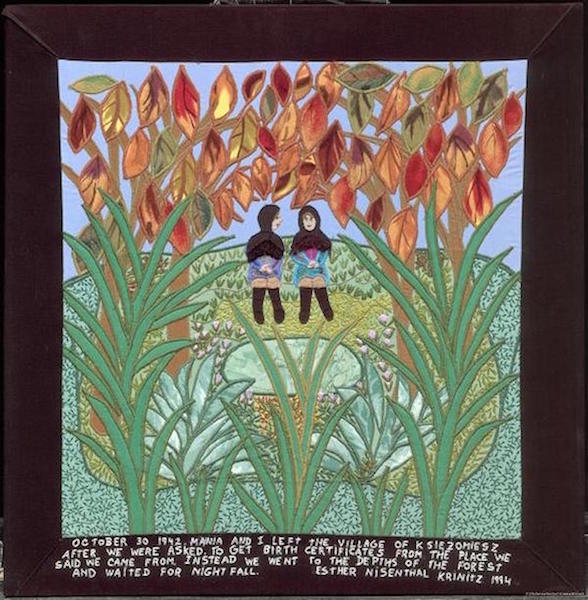